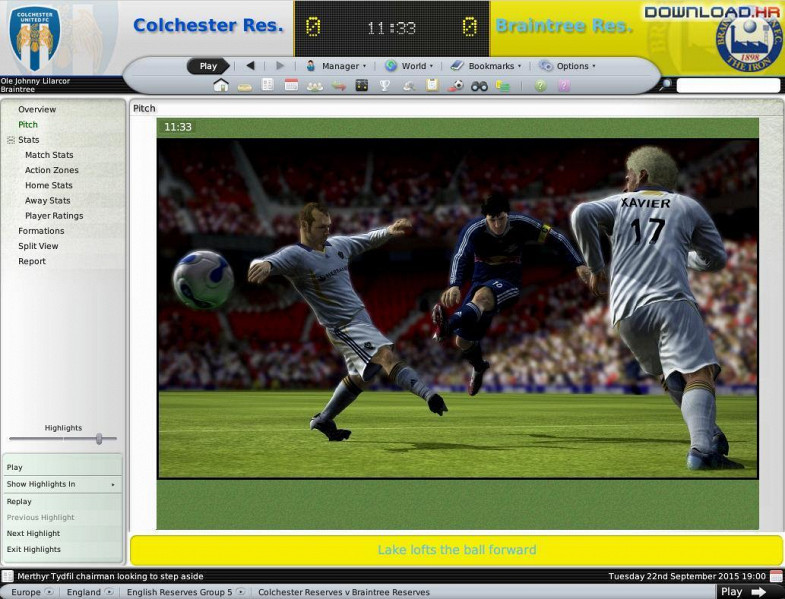 Here are some key features of "Football Manager 2009 Strawberry Demo": · Transfer Center - A new way of managing all current transfer and loan bids for your club, both incoming and outgoing, making it easier to compare bids and reject or accept them. · Finance Revamp - Sports Interactive have updated the finance area of Football Manager 2008 to better reflect the ever-changing modern football world. More information is available to the manager too, including, but not limited to, corporate matchday income, season ticket news, investment funds, improved sponsorships, collective win bonuses and the ability to move around funds from the wage budget and transfer budget (and vice versa) at any point to help you in your quest for the ideal squad. · International Management - The international management gameplay has been completely revamped for Football Manager 2008, including, but not limited to, media improvements, international retirements, player interaction, international scouting, improved national pool selection, captain selection and a separation of international and club morale for players. · Match Flow - The largest change to matchdays in a Sports Interactive game since the introduction of the 2D match engine. Match flow brings more atmosphere to matchdays with match previews, team talks, opposition player instructions, the match itself, half time and post match now seamlessly following on from one another. There's no more pausing to make tactical changes and you'll find a mini-radar pitch whilst making those tactical changes to keep you in touch with what's going on in the match. · Confidence - You can now easily tell what your board and supporters think about your performance in the game through the new confidence section. This gives you feedback not just on your current progress in competitions, but also your financial management and signings. · Easier to Use - A much cleaner skin, a brand new advisor system to help you through various areas of the game, a new notes and notebook system, better button positioning for simpler navigation and an updated tutorial and manual. Also, coach reports to make taking over a new team easier and a new calendar system - which lists all important dates throughout the season - help to make Football Manager 2008 the easiest Sports Interactive game to use yet. · Fan Days - The board can now arrange fan days to boost ailing attendances, or for matches that are likely to attract a low crowd, with a long-term affect to attendances if all goes well. · Awards Overhaul - A full overhaul of the awards system inside the game, which is not only more accurate but also includes new awards, such as the European golden boot and a 'best eleven', which shows the all-time (in-game) best XI for all teams and nations. · Match Engine Improvements - A greatly improved match engine, once again utilizing the footballing brain of Ray Houghton and other tools used by real-life managers, to make the most accurate simulation of football in a computer game even more like-life than ever before. Oh, and the ability to change the pitch dimensions at the start of the season to suit your style of play better. · Expanded Media - More media and feedback than ever before, plus more detail in existing media, and a new competition news section to find out what major things are going on in all league competitions. · Regenerated Player Photos - All in-game regenerated players now have pictures using FaceGen technology to give each player more personality. This gives the ability for players to be seen to mature and grow-up looks-wise in front of your eyes as the game is going on. · Speedyfastier - Saving and loading is now significantly faster, with network gaming quicker and smoother to play, as well as tactical changes and match reports being faster than ever before.